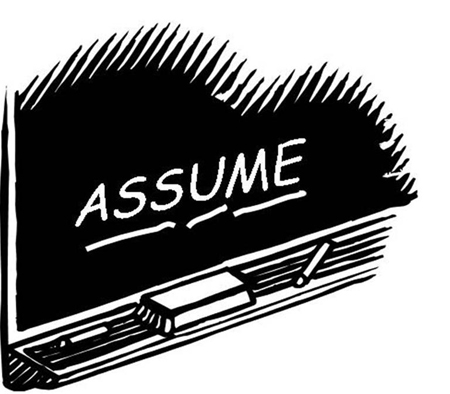 People make assumptions all the time. There’s even a cliché for it. “When you assume, you make an ‘ass’ out of ‘u’ and ‘me.'” Not very classy, but it makes the point. It means that you suppose that you know all the facts when you form an opinion, when you don’t. And you aren’t questioning that maybe you you’re missing evidence on which to formulate your conclusions. You’re building a house on quicksand and don’t know it.

The facts are true, but the conclusion is false. It’s missing another fact. I go by that name because, when I was young, my two best friends on my street were also named Linda. Everyone was confused when we played together. We never knew which of us was being referred to when someone called, “Linda!” said, “Linda did that” or, “Linda, stop that!” To tell us apart, our folks and friends started using both our first and middle names.

People draw the wrong conclusion because they don’t have all the facts. None of us know everything about another person or a situation. We can’t read someone’s mind. That’s why it’s dangerous to assume you know why someone did or said something to you. You draw a conclusion based on faulty or incomplete information. It doesn’t serve either you or the person you’re evaluating, because you’ve probably made an incorrect assessment. And you make flawed decisions and take actions accordingly.

For instance, you could think that you lost a sale because you didn’t deal with the prospect’s questions well enough. Instead, it could be that it just wasn’t the right product or service for them. Or you could assume that a friend is angry at you over something you said. But it could be that what you said triggered an unhappy memory and they’re just trying to process the emotions that have surfaced.

Unfortunately, assumptions lead to creating whole stories around the supposition. And those stories become real to you. They can keep you stuck, affect relationships, further miscommunication, and block opportunities and progress.

There are a lot of reasons why we leap to an incorrect conclusion. Here are just a few.

It’s easier. Not taking the time to discover the truth means you don’t have to make any changes. For instance, you could decide that getting in shape is simply too hard, when you really don’t want to make the effort.

It’s expedient. It’s a shortcut to a decision about a situation or person. You want a quick answer and don’t want to take the trouble gathering information. If you act on your choice, it could lead you in the wrong direction, damaging relationships and your future.

It feels powerful. When someone jumps to a conclusion, it makes them feel like they have some control over the situation. Feelings of control reduce stress, so this is a way for them to ease inner anxiety.

It’s out of fear. You could be afraid of what you might find out, so drawing a conclusion feels safer. Unfortunately, it’s the more dangerous road to travel because it closes doors.

Gain Clarity for a Better Life

A way to gain clarity about your assumptions is to question them. What facts or evidence do you have that support them? Or that refute them? Do you have all the facts or evidence? What can you do to gain more? You can ask for more information and reevaluate your conclusion for accuracy. It feels risky, but people are usually delighted that you care enough to make a decision based on all of the facts.

Assumptions aren’t helping you. Instead, they’re hindering you. When you realize that, you open doors to much greater possibilities for a better life. Letting go of your suppositions, and checking the evidence, improves your mood, relationships and actions. Take back your power and find clarity, which will lead you to wiser decisions.

I let go of my assumptions about myself, situations and other people. Instead, I take the time to seek out the facts and become clearer on what’s truly going on. The Universe guides and directs my inquiries; bringing me information I need on which to form a clear opinion. As I do, doors to a greater life full of harmony and joy open for me.

Watch the accompanying video, Are You Seeing Clearly?