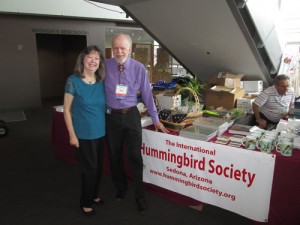 The founder of the International Hummingbird Society, Ross Hawkins, and I met at a monthly meeting of the Arizona Chapter of the National Speakers Association several years ago. It was ironic that we’d get to know a fellow Sedonan there, especially since we’d lived a couple of blocks from each other.

A couple of days before this year’s Hummingbird Festival, he called me in distress. The person who’d planned to emcee and introduce his speakers had to back out due to illness. Although Ross had performed that function before, he had so many responsibilities that he really didn’t want to do it again. So he asked if I could step in. I couldn’t on Friday, due to clients scheduled, but I said I could for the weekend.

Friday morning was the only time I had to prepare for the event. Most of the presenters hadn’t sent in formal introductions, so I edited their program descriptions and bio’s so they’d be more interesting when they were read. 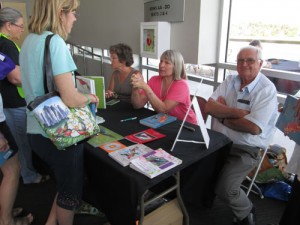 On Saturday and Sunday, I was honored to meet and introduce several speakers on an array of topics, from photographing hummingbirds to plant that attract them, to current scientific research. Due to one of the presentations, I was inspired to buy a book on “Hummingbird Flowers of the Southwest,” by presenter Marcy Scott.

There were also delightful vendors of all things hummingbird. In Sedona, we have two hummingbird themed shops, and they had booths. There were paintings and photos of hummingbirds, books and feeders, information about the tiny creatures, and lots of other hummingbird inspired products.

It was stressful to have so little time to prepare for the event, but I’m so glad that Ross thought of me and called. Not only did I enjoy participating in the festival as emcee, I loved meeting vendors, attendees, and speakers who share a love of this magical bird.