Recently, Jeff and I visited the Grand Canyon again. Since it’s only a couple of hours from our home, we try to go at least once a year. This time, we drove in through the eastern entrance. The eastern rim is less crowded and less well known than the more popular south rim. 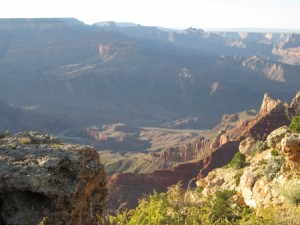 On the eastern rim, you get completely different views, because this part of the Canyon is much wider you have a clear view of the Colorado River as it winds its way through the canyon floor. We had a late picnic, then went for a hike across an undeveloped promontory to an overlook. There were no trails to the point a mile or so away, but I thought we’d find it by following a dry creek bed.

We took a compass reading at the beginning of the hike and started out, following the creek bed. Every so often, we’d pull out the compass and check it to make sure we were headed in the right direction. Sometime later, the creek bed disappeared. We again looked at the compass and kept going.

We had to keep detouring around fallen trees and dense bushes. After about an hour, we began hearing 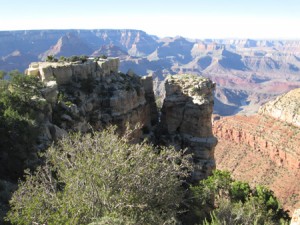 traffic, and a few minutes later saw cars driving by. We’d looped back to the road.

This is what happens when you don’t keep your goal in the forefront of your mind. We should have kept the compass out at all times and followed its readings. By having to detour around all the brush, we got off our heading and ended up far from our goal. It’s just the same as when you have distractions in life and don’t check your priorities (your compass) so they can stay on course. Get off course, and you may never reach your goal, just like we didn’t on our hike.

Since it was getting late, and we had no idea how far we were from the point, we headed back to our car. 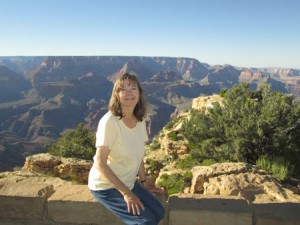 Since we’d trekked a long way from where we’d planned and from where we’d started, it took an hour to reach the parking area. Although we were disappointed we weren’t able gotten to see that vista, we’d had an enjoyable hike. And we spent the rest of the afternoon at developed points on the eastern rim. Getting off course doesn’t mean you’ve failed. It just means you need to correct your course and head toward your goal.