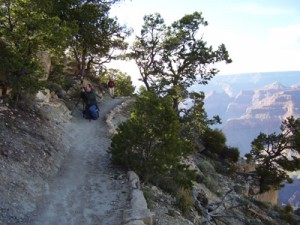 Many years ago, I decided to overcome my fear of acting. Instead of diving in, I attended an audition for a play at the local community theater to familiarize myself with the process. This lowered my anxiety threshold, and I made plans to ease into auditioning for a play a few months later.

The Universe had other ideas. The director insisted I audition for that play and gave me a supporting role in it. Within weeks of committing myself to overcoming my fear of acting in front of an audience, I was officially a thespian.

The only thing that had prevented me from doing this before was my fear. I was afraid I’d forget my lines or my blocking, and panic if something unexpected happened. None of those fears were based on reality. They were simply excuses to keep me from fulfilling a goal.

As a survival instinct, fear’s mission is to give you the energy to fight or flee from a physical danger. But the mind doesn’t distinguish between a real or imagined, physical or emotional threat. It reacts to the image in your mind. Whether the image comes from your eyes or your imagination doesn’t matter. Your mind acts on it in the same way. Only when the hazard is real is the instinct a positive response.

Most of what you fear is a lie. Unless it’s acting as a survival instinct against physical injury, fear is an emotion that’s based on your beliefs. The emotion is an attempt by older thought patterns to keep you safe. Those thoughts were developed in an environment that no longer exists. If you didn’t have those beliefs, you wouldn’t feel fear.

Those patterns were designed specifically to convince you that you couldn’t survive if the worst happened. Fear of rejection, disapproval, failure, disappointment, responsibility, and success are just a few reasons why this emotion keeps you stuck. What you tell yourself about a situation becomes an autosuggestion that reinforces the feeling. This makes you think it has more validity than it actually does and strengthens its grip on you.

As a child, you were taught to cross the street by looking both ways to make sure there weren’t any cars coming. That’s normal caution. You check to see if there’s danger coming, and if there isn’t, you move ahead. But you could continue to look both ways forever and never commit to crossing the road. In this case, you’d be stuck in paralyzing fear.

The autosuggestion that created your belief is mutable. You created it and you can change it. Changing the belief changes the emotion. For instance, you can realize that you now have experience, knowledge and resources you didn’t have when the old thought patterns were created.

If you ask for a raise and get turned down, you’ll be disappointed. But you won’t be devastated as you might have been as a child when something similar happened. Speaking up for yourself and getting belittled is upsetting, but it doesn’t have to destroy you anymore. You can even find help from people and places if need be.

When you take a deep breath and forge ahead, the Universe comes in to support and guide you. Opportunities, contacts, resources, knowledge and anything else you need ambles into your path. Your energy is directed towards your goal, instead of toward playing it safe and staying put.

When fear comes up in your life, assess it to see if it’s realistic or valid. If not, remind yourself that it’s a lie, trying to fool you to believing there’s danger where none exists. Once you’ve established that it’s safe to move forward, fear is no longer helpful. Commit yourself to your vision and dedicate yourself to moving forward. Fear begins to dissipate when you prove to yourself that its message is false.

After that first play, I acted in three more. I remembered my lines, blocking, choreography and easily handled unexpected situations that arose onstage. It was a magnificent time in my life. I enjoyed it, grew from it, and became a different person because of it. When you stop letting fear rule your actions, your life will change. Not only will it be richer and freer, but also you’ll be more satisfied and fulfilled.

Fear is a false idea that simply comes from my old beliefs. Beliefs that my mind has created, my mind can also change. I remind myself that fears are simply to caution me. The Universe protects and guides me in the right direction. Whatever I need to fulfill my goal appears, as I need it. As I commit myself to moving forward, the next step unfolds for a richer and fuller life.