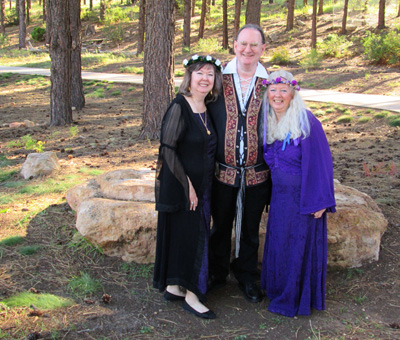 Bride on left, groom in middle, maid of honor on right.

Jeff and I have been together almost 20 years. Since it seems we’re compatible, we decided it was time to make our union official. And since it was simply a formality for us, we wanted a small, informal type of wedding.

Last week, Jeff and I did the deed. We got married in an intimate, nontraditional ceremony in a Flagstaff park. Since we love all things Celtic, we used that as our theme.

Celtic music played in the background and we wore Renaissance inspired dress. Our minister is the president of a Celtic Heritage organization in Arizona and a friend of ours. Jeff wrote our vows. He’s amazing at writing from the heart. I treasure the sentiments he writes in the cards he gives me.

We had only 3 guests. My oldest and dearest friend, Linda, was my Maid of Honor. Yes, we’re both named Linda. It caused all sorts of confusion when we were young. We’ve known each other since we were 4 years old, and have been through a lot together. Jeff’s folks were the only other attendees.

We lucked out with the weather. Months ago, when we chose the date, we planned it to be after the main part of the monsoon season would be over. But Arizona has had a late monsoon this year, mainly in the month of September. We had major storms the week before and also a couple of days afterwards. Fortunately, the weather for our wedding was as perfect as it could get.

Now we embark on a new voyage, as married partners. I anticipate a smooth journey, but with more adventures to come.