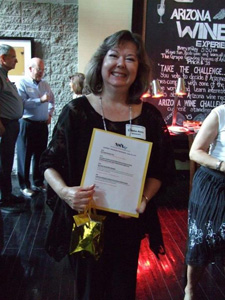 This month, I went to the Arizona Chapter of the National Speaker’s Association Summer Soiree. I drove the 2 hours to Scottsdale, into 110 degree heat. Near the end of the party, an haboob (sandstorm) blew through. I stayed until a while after it had passed, because I didn’t want to drive into it on my way home.

It was fun to get to know some people I hadn’t had a chance to socialize with before, as well as visit with some of my friends. But the high point for me was that I won a raffle prize. They had three available, and one gentleman won the other two. Mine had three hours of coaching by three different coaches (an hour each), a gift card, and tickets to a museum. All of which I’ll gratefully use.

I’m beyond thrilled! I’ll be contacting the coaches, Les Taylor, Loretta Love Huff and Lorri Allen, soon to set up my sessions. It was so worth it for me to make the trip down and back, even with the haboob.