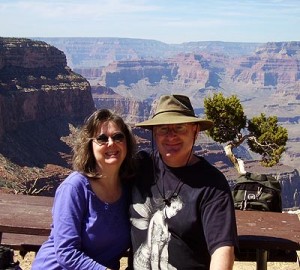 Jeff and I visited the Grand Canyon again. This time, we hiked five of the eight-mile long Rim Trail. We’d already hiked the other three miles of it last November.

In November, there were a few patches of snow on the trail in the shade. That doesn’t sound bad, until you realize that the path is on the edge of the cliff. We were nervous traversing the snow and ice because if we’d slipped it would have been a long way down. 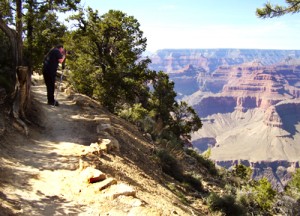 In the distance on the Rim Trail, Jeff is using a tripod to take a photograph.

This time, as we hiked on this narrow trail on the edge of a steep drop, I realized it was a good metaphor for keeping your vision on where you want to go. It’s a good thing to be aware of the dangers, so that you can avoid them. But if you focus on them, you’re all too likely to walk right into them. 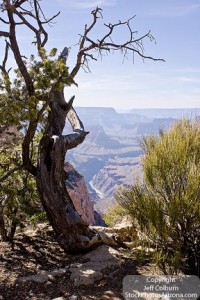 When we walked, we had to keep our eyes on the path so we wouldn’t begin to drift towards the drop off, trip on a root, roll our boot on a rock, or lose our balance and fall off the cliff.

The same thing can be said of success. Be aware of the pitfalls so you know what to do to avoid them. Stop and assess them. Plan what to do to deal with them. But when you’re moving, keep your eye on your goal. Focus on it alone. If you don’t, you just may walk right off the cliff. 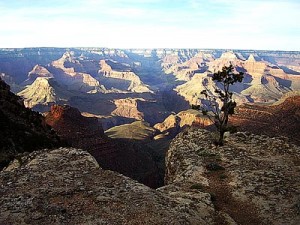